Flowershow
of the Southeastern Chapter of the ARS

On the page about 'ASA Convention 2003' I write already about this flowershow. I stayed with some friends in the north of South Carolina and the fowershow was in Asheville in the south of North Carolina. I was also asked to act as a jurymember to judge the flower trussses. In different categories, like deciduous azalea species, or rhododendron hybrids etc. The weather before had been quite bad, but the trusses were excellent. Many tables were full of thododendrons and azaleas which I had not seen before. Every flower truss got points for the shape, colour, presentation and more criteria. In each caregory there was a winner, and the overall winner was....I don't know his name and the plant anymore. Well, I was quite tired and photopraphing a lot and the judging of all the flowers were may be a bit too much for me. But I had a wonderful day and it was a fantastic event.
Outside many plants waited to get a new owner. Many members and visitors discussed about the true names of the plants. I saw a R. flammeum which should have red-orange flowers, but there was one with pink flowers. I think that some bees might be guilty by pollinating themselves.
The "mental cross-pollination" was also very intense. By the way, you can order a guide to set up a flowershow with the ARS. Organizing a flowershow must not be underestimated. It means a lot of work an organizing, but it is worth a try.
Below some more pictures with some comments. 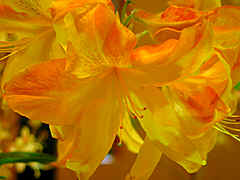 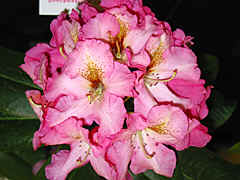 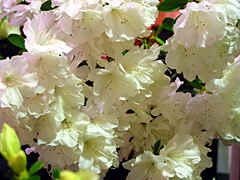 I have seen - as a visitor - from the outside more flowershows at the annual Conventions of the ARS. Such as 1992 at Long Island; in 1993 in Tacoma, WA. And also in Asheville in 1994. 1996 at Oban in Schotland. But this one of a chapter was one of the best!

As you see, vases are prepared for the trusses to put them in. To give me any duty to fulfil, I had to fill the vases with water. May be there is some 'symbolism' in it. Dutch people and water are a well-known combination. Though the "Waterer" family, famous for their rhododendron hybrids, is British.

I stayed with some friends, the Phillips\Woods family and they played an important role in the flowershow. The workers also need some food and drinks etc. The jury members got their instructions and had to do 'blind' judgement.  My impression is, that most of the time these organizers are often the same people. A world-wide phenomenon.

After the flowershow I drove arond with some friends to visit some gardens and gardeners, like Glenn O'Sheal and Nick Anastos. We went to the large garden of Ed Collins, who tested my knowledge.... The large garden or park of Mrs. Velma Haag, amazing what she and her husband have done.
My experience is, that Americans are very friendly and generous. Appearently I always meet nice people. I think it is a matter of reciprocity. Thanks to many friends I had many wonderful times in the USA. I hope to repeat it frequently!