When you are a hybridizer yourself, it means that you are extra interested in the hybridizing work of others. You try fo follow their work and like to have contact with them. This is the case with Joe Climavicz and me. Now and then he sends me some cuttings or seeds, and reverse.
So, let me introduce him with his own words, as he wrote his 'story' about his 'obsession' of hybridizng evergreen azaleas.
New!! see 4 new albums below!!

I never met Joe Klimavicz so far, which I hope to do next year 2006.  But being a member of a mailing list of azaleas you get in touch with each other and from one thing comes another. Already many years he hybridizes for hardy, strong plants with double long lasting flowers.  For this goal he uses very 'wintertough' plants like 'Elsie Lee'. But also less hardy azaleas like "Satellite' with bicolor flowers.  I tried also these crosses, and indeed, I have some nice results, many with double flowers, but no bicolors. Most are hardy because of the hardiness of 'Elsaie Lee'.
Even his daughter 'Caitlin Marie'  is hybridizing  with some nice results. She is also experimenting to double the chromosomes of the azaleas.
Meanwhile he registered 5 of his best new hybrids: 'Caitlin Marie' 1998 - 'Lovely Linda'  2000 - 'Sandy Dandy'  2003 - 'Brenda Marie'  2005 and 'Gloria Louis'. 2005.
I am sure that he and his daughter(S) will provide us with more of these nice new hybrids.
At the bottom of this page you will find a short story about Caitlin Klimavicz. 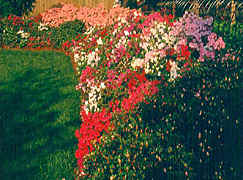 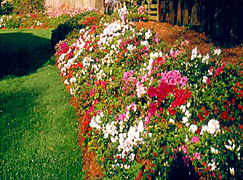 Joe Klimavicz has been an avid hybridizer of fine evergreen azaleas since the late 1980s. He carries out his active program in the back yard of his one-third acre home in Vienna, Virginia.  Each year, Joe makes five to ten crosses and raises 500-1000 new hybrids that he moves out of his basement and into his cold frames for the growing season.  He raises most of his plants in a one-gallon size, but admits that he eventually throws 99% of them away, saving only the very best of each cross for further evaluation and breeding, or perhaps a prestigious spot in his garden.

The Klimavicz hybridization program is aimed at developing sturdier varieties that are better able to survive neglect.  Specific hybridization objectives include a plant that is hardy, vigorous, disease and insect resistant, floriferous and has a flower that is long lasting and bright in color.  Joe's three young daughters also do their own azalea hybridizing.
Joe is a Northern Virginia native, and although he had grown azaleas for landscape purposes before, he first caught the hybridizing fever after seeing a relatively tender but boldly variegated Belgian hybrid 'Satellite' in bloom at the home of azalea hybridizer, Bob Stewart.  Joe took a few ‘Satellite’ flowers home, and ‘Elsie Lee’ just happened to be in bloom, he made his first cross:  ‘Elsie Lee’ x ’Satellite’.  The success of this first hybrid cross encouraged Joe to expand his program.

Since then, Joe has been using a wide variety of hybrids and open pollinated plants in his crosses.  As many hybridizers have discovered, Joe has learned that certain crosses consistently produce excellent plants, but crossing two great plants does not necessarily guarantee great offspring.  'Elsie Lee' is well known as an outstanding parent for azalea hybridizing since it is fertile and sets large seedpods.  It also passes on hardiness and double flowers to its progeny, and so many people have been using 'Elsie Lee' in the development of new azalea hybrids.

Joe is always glad to share what did and did not work.  He can tell you from experience that ‘Gay Paree’ will not set seed, and that the big seed produced from crossing ‘Haru-No-Sono’ x ‘Elsie Lee’ will not germinate.  Joe is using a wide variety of other hybrids and open pollinated plants in his crosses.  He believes that certain crosses consistently produce better plants, but that crossing two great plants does not guarantee great offsprings.

Joe numbers his crosses by selecting one letter from the female plant and one letter from the male, e.g. ‘Elsie Lee’ x ‘Satellite’ becomes LS.  The LS is followed by the year of the cross, and then a unique number for each plant brought out of the basement, e.g. LS-91-47.  Joe makes his own nametags out of aluminum sheets, and every plant in his yard is labeled.  Joe maintains a computer listing of all of his crosses, to include plant number, flower and plant description, hardiness, and the cross.

Joe says that he feels kind of like a kid in a toy store in the spring – with all the new azaleas blooming, and choosing a favorite is difficult.  However, Joe introduced his first hybrid – ‘Caitlin Marie’, named for his oldest daughter, at the 1998 Convention.   Joe has raised several thousand ‘Elsie Lee’ x ‘Satellite’ crosses and this one is the overall best plant.  ‘Caitlin Marie’ (LS-91-47) blooms in mid-season, and has 2” diameter extremely double bright pink flowers.   This plant is very floriferous, vigorous, medium height, very hardy, and has great looking dark green foliage all year.  The most spectacular feature of this plant is the long blooming period due to its extremely tight very double flowers.

Future crosses may focus on using an open pollinated Kiusianum because of its plastic-looking foliage.  This plant is also very upright and vigorous for a Kiusianum.  On to this plant, Joe would like to grow a small double flower, perhaps from ‘Elsie Lee’, that would have extremely thick petals, perhaps from ‘Haru-No-Sono’.  Early flowering would also make the flower last longer due to the cooler weather, and this characteristic may come ‘Festive’ or ‘Dancing Butterfly’.  In order to make these kinds of crosses, Joe keeps his freezer filled with pollen from the late bloomers like ‘Haru-No-Sono’.

Let me end with a 'curriculum vitae' of Caitlin Climavicz:           read her article about  polyploidization of evergreen azaleas.

Caitlin Klimavicz is currently a junior at James Madison High School in Vienna, Virginia. She has regularly attended meetings with the Northern Virginia Chapter since 1989. She has won first place two years in a row at het high school science fair, and received a first and second place award in the regional science fair based on this project. Her first science project was "The Effect of Polyploidy on Azalea Seed Germination", which was the preliminary step in working to create better polyploids because the main problem with polyploids was their lack of germination in crosses. She hoped that irradiating the seed would not cut down on germination to the extent that the cross-pollination did, but at the same time create the posotivbe effects of polyploidy.
NEW!! Albums about the hybridizing work of Joe Klimavicz:    album 1     album 2    album 3    album 4